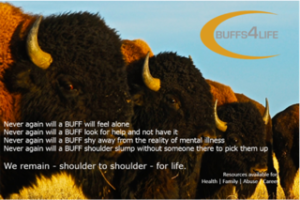 Coming in June 2018, Buffs4Life will implement these three important services for Buff Letterwinners

Life after football is not always easy. So many athletes have big personalities and are all smiles but there is something inside which keeps those on the outside from ever seeing suicide symptoms.

Working with the natural network that players have, Sean Tufts (FB-2000-03) has written a plan to engage former football players from his era (roughly 1996-2013) via an assigned captain. Captains will be in touch with former players on their roster to keep them apprised of former player(s) who might be dealing with any one of multiple concerns, for example, health or work issues and/or addictions. Trigger points which could be a suicidal concern. The goal of this program is to connect former Buffs to have a “clearinghouse” resource center they can activate 24/7 for help when they need it most.

Leading the initiative are former University of Colorado Football Coaches Gary Barnett and Brian Cabral, who were named Co-Honorary Chairs for Buffs4Life’s 2018 fundraising events and campaign. According to the American Foundation for Suicide Prevention, suicide is the 10th leading cause of death in the United States. Men die by suicide three-and-a-half times more often than women. On average, there are 121 suicides per day. One death is too many.

“Immediately after the death of Nate Oderberg in 2005, Mary and I started a Foundation for the prevention of Youth Suicide”, said former head coach Gary Barnett. After Drews’ passing, I promised Drews’ teammates and parents that we (former coaches and teammates) would ‘do something significant’ to try and make sure this doesn’t happen again.

“Suicide has touched the University of Colorado alumni athletic community deeply. A year ago, we lost NFL and CU great Rashaan Salaam, and in September 2017, we lost Drew Walroos, a former University of Colorado linebacker who also went on to play in the NFL” said Brian Cabral. “I recruited both Rahsaan and Drew. These losses affected me deeply. Working with Buffs4Life after twenty-four years of coaching at CU allows me to help others who may be in need. I look forward to utilizing my relationships and connections throughout the campaign.”

Sean Tufts, Buffs4Life Board Member, NFL and CU team captain alumni football player said, “There are few bonds as close as ‘teammates’. Maintaining these relationships can still pose a challenge, especially when someone is struggling.  Knowing who needs help and actively reaching out is critical.” Sean is one of four Buffs4Life team captains who will lead outreach teams to rebuild rosters and connect with former football players. Working with former football coaches and players, Buffs4Life plans to test their new program within the football alumni network before rolling it out to other sports within the CU system.

If you know anyone who needs these numbers, please share them.

If you need these numbers, please use them.

Help is available. We are here. We are listening.