Saundra and Lee Adams Get a New Home 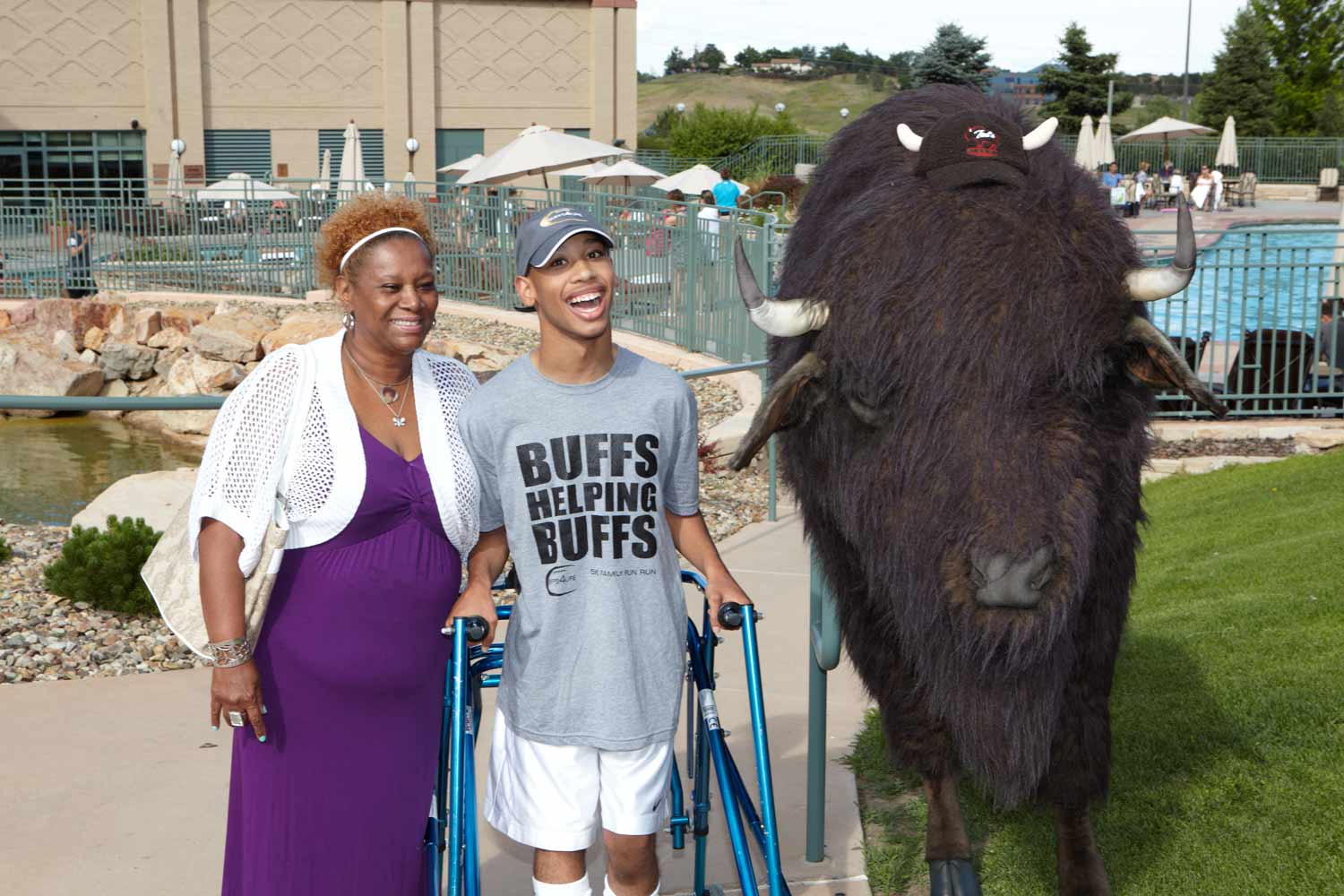 BOULDER — Chancellor Lee Adams will turn 18 this year — the same age his father was when he first stepped foot on the University of Colorado campus as a freshman football player in 1992.

Lee has never met his father, Rae Carruth. The former Colorado star wide receiver and first-round draft pick is still in a North Carolina prison after his 2001 conviction on conspiracy to commit murder charges for his part in a plot that claimed the life of Lee’s mother, Cherica Adams. Lee was delivered prematurely after his mother was shot and has suffered his entire life from cerebral palsy and brain damage, a result of his mother’s injuries and his premature delivery.

But against all odds, Chancellor Lee Adams has survived. Not only survived, but thrived, thanks to the constant care and love of his grandmother, caretaker and best friend, Saundra Adams.

Lee and Saundra still live in North Carolina, less than a day’s drive from where Carruth is imprisoned, awaiting his release (scheduled for 2018). But earlier this year, they moved into a new home, one that will allow Saundra to continue to care for Lee as he grows into adulthood. Their new home does not have stairs, a major factor in Lee’s safety; and it has a bedroom and bathroom specifically for him, another key component of his continued recovery.

An interesting twist? Their new home was made possible by a donation of more than $150,000 from Buffs4Life, an organization of CU alums whose goal is to help members of the Buffs family in need.

On the surface, the situation might appear as a paradox — a group of CU alums helping the son of a former player whose situation and actions cast a pall over all of Buffs Nation.

Chancellor Lee Adams and his grandmother are part of that family.

“Lee has the heart of a Buffalo,” said former CU player, assistant coach and head coach Jon Embree. “The stuff he’s doing now and the obstacles he has overcome — nobody gave him a chance. Nobody gave him a chance to do near what he’s doing. Once you meet Lee and Saundra, once you see the courage and heart that they display on a daily basis, there’s no question we are doing the right thing.”

Embree, now an assistant coach with the San Francisco 49ers, has been the driving force behind the effort to help Lee and Saundra. It is not something he particularly enjoys discussing — ” I love trying to help, but I don’t like publicity for helping someone. That’s just not who I am.” — but it is something he wholeheartedly believes is the right thing to do. Since becoming aware of the Adamses’ situation roughly five years ago, he has donated countless hours of his time toward helping them.

“I had a decent relationship with Rae (when Embree was an assistant coach at CU), so I was always kind of drawn to that story and the situation,” Embree recalled recently. “Then I saw Saundra on (HBO’s) Real Sports. You could see she had a tremendous heart. She has said a million times that she has forgiven Rae, and she’s never complained. When I saw that, I said we have to do something to help her. We had to do whatever we could.”

“We” in this case is Buffs4Life, an organization that traces its beginnings to 2006, when a group of former CU players got together to help former teammate Anthony Weatherspoon and his battle with leukemia. Since then, the group has grown and they have helped a long list of Buffs facing a wide variety of difficulties. The group is not officially affiliated with the Colorado Athletic Department, but it has become a major force in helping Buffs alums through difficult times.

“I can tell you this, no one has greater passion for the program or being a Buff than Jon Embree,” said CU Associate AD David Plati, who was Embree’s sports information director when he was a player.  “You would think he could be bitter or would have disengaged a bit when he was let go as head coach, but he’s never for one second wavered for his love of the program.”

When Embree approached his fellow Buffs4Life members, there was no question they would help Saundra and Lee.

“Our mission is to help Buffs in need, help them through mental, physical and financial difficulties and support them,” said CU Associate Athletic Director Lance Carl, who serves on the Buffs4Life Board of Directors. “That’s what our mission is. We all realize Rae Carruth was a Buff — and that means Chancellor is a Buff as well. It’s strength of the herd. It’s who we are and what we believe in. We are not going to shy away from a difficult situation.”

After the first Real Sports documentary on Saundra and Lee (there have been two), Buffs4Life brought them to Colorado for the group’s annual gathering.

“That first year, we were able to do a few things for her,” Embree said. “Not a lot, just a little. We did what we could.”

Embree stayed in close touch with Saundra and Lee, managing to see them on a fairly regular basis when he became an assistant coach with the Tampa Bay Buccaneers. He made sure that each year, when the Bucs visited Charlotte to play the Carolina Panthers, they were invited to the hotel to meet players and staff.

Embree then — somewhat reluctantly — made an appearance on the second Real Sports episode. At that same time, he became acutely aware of Saundra and Lee’s need for either a remodeled home or a new one.

“Her old house had stairs, and she had to prove to social services she could carry Lee up and down the stairs in case of emergency,” Embree said. “That’s really one of the situations that facilitated this whole thing, when I found that out. He was growing and getting bigger. When he was 5 years old, it was one thing for her to carry him up and down the stairs. When he’s 16, it’s a different story.”

The second Real Sports episode spurred a “tremendous” outpouring of donations from around the nation to Buffs4Life in support of the Adamses.

One of those people willing to assist was a contractor in the Charlotte area who reached out and volunteered his company to help remodel Saundra’s house. Embree met with him and they started plans to remodel the house to meet the standards necessary for Saundra to continue taking care of Lee.

Nobody, Embree said, pulled away from the project.

Instead, “Everybody stayed all in. We kept going and going and we exceeded that 150 (thousand) number.  There’s more coming in, and maybe some big pieces — hopefully enough to get that whole thing paid off for her. It’s been just an unbelievable outpouring of support.”

And as a result, Saundra and Lee moved into their new home in March.

“They finally have the things that she needs so they can live as normal life — at least as normal as possible,” Embree said. “She is obviously overwhelmed. But what has been so impressive about her from the time we met is that she’s never once asked for help. We’ve had to coax out of her what she has needed — a computer for Lee, a new walker, things like that. But she is clearly very grateful for what has happened.”

Lee continues to make slow but steady improvement. When he was an infant, doctors said he would likely never be able to walk or communicate.

Today, he can do both, albeit not enough that he will ever be able to live on his own.

Still, all those around him call his progress nothing short of miraculous.

“They really do display the heart of a Buffalo,” Carl said. “For Saundra to take on that responsibility — she calls it an opportunity — to raise Lee from a baby to now has taken incredible courage and heart. You see the strides he’s made and it’s amazing. When he first came out here four or five years ago, he was in a walker and wheelchair. Now he’s walking on his own. When you see those things, when you see his courage and heart and smile — it tell you we’re doing the right thing.”

Now a teenager, Lee bears a striking resemblance to the father he’s never met, right down to the infectious smile that can light up a room. In a number of interviews, Saundra has said she has completely forgiven Carruth for his role in taking her daughter’s life.

That, Embree said, has been one of the lessons that has made helping Lee and Saundra worth every minute.

“I’ve learned about forgiveness from her,” Embree said. “I’ve learned about what it means to truly be a selfless person. When you see her, she puts everything for Lee above her own basic needs. And I’ve learned that there are a lot of good people out there who are willing to help. It’s good to know that.”

Indeed, Embree had no idea that the level of support and care for Lee and Saundra would reach its current proportions. It has, he said, renewed his faith in people.

“The big numbers and donors have been great, no question,” Embree said. “Those have helped us do some good things. But the other people … I know it means something when somebody gives you $50. I get it — that might be all they have, but they’re willing to give whatever they can give to help her, help someone they don’t even know. That’s impressive.”

And, Embree said, Chancellor Lee Adams will leave a positive legacy, one born from horrific circumstances.

“His impact has been big,” Embree said. “He’s shown courage, heart — and he is always smiling. He takes joy in everything he does and he makes everyone around him smile. He’s also helped a lot of people find good in themselves.

“That’s the impact he will have.”